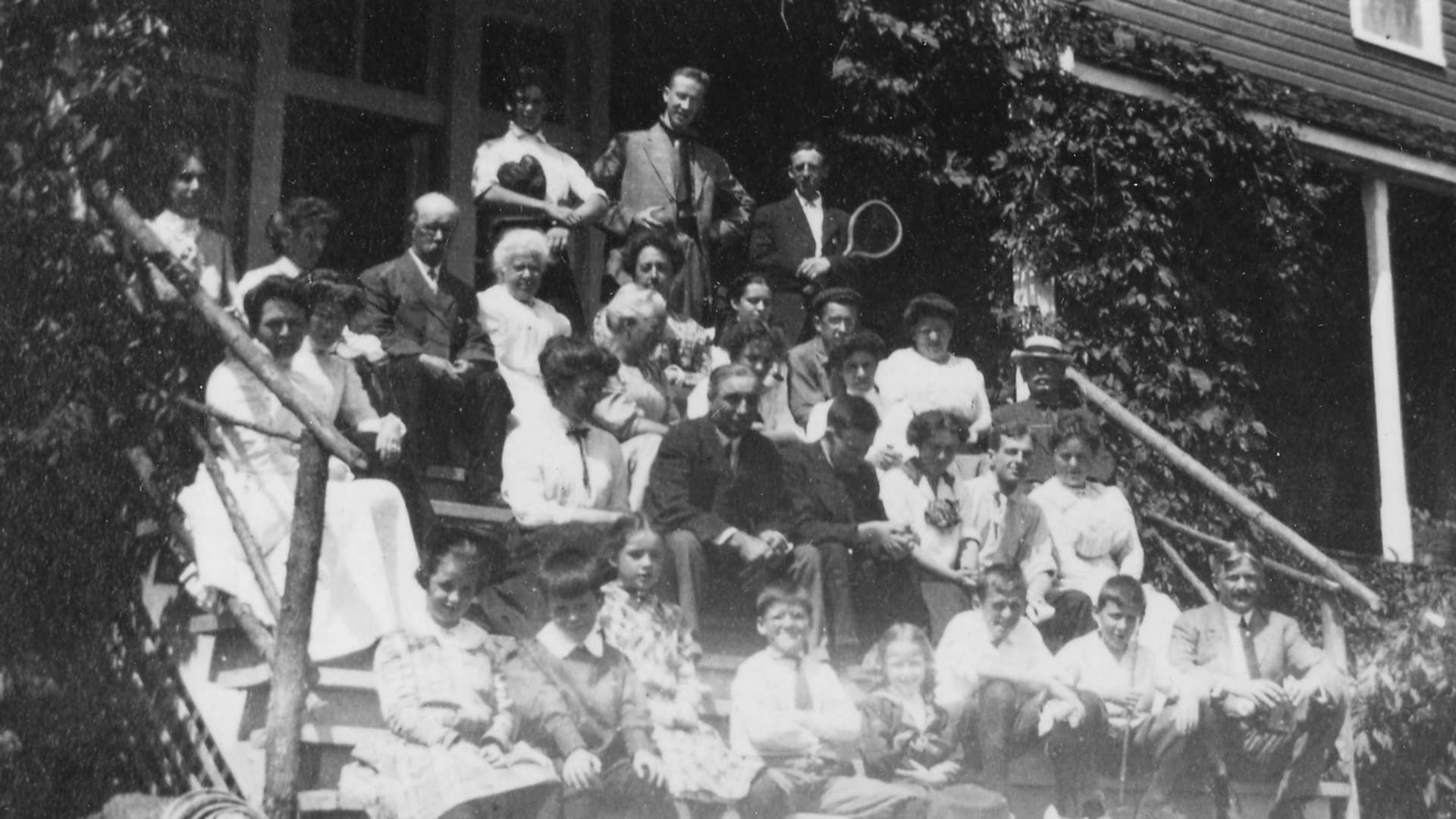 The story of Deerhurst’s early days is largely the story of the Waterhouse family, who, for three generations shaped the resort’s spirit of hospitality and growth as one of Ontario’s longest continually operating resorts. 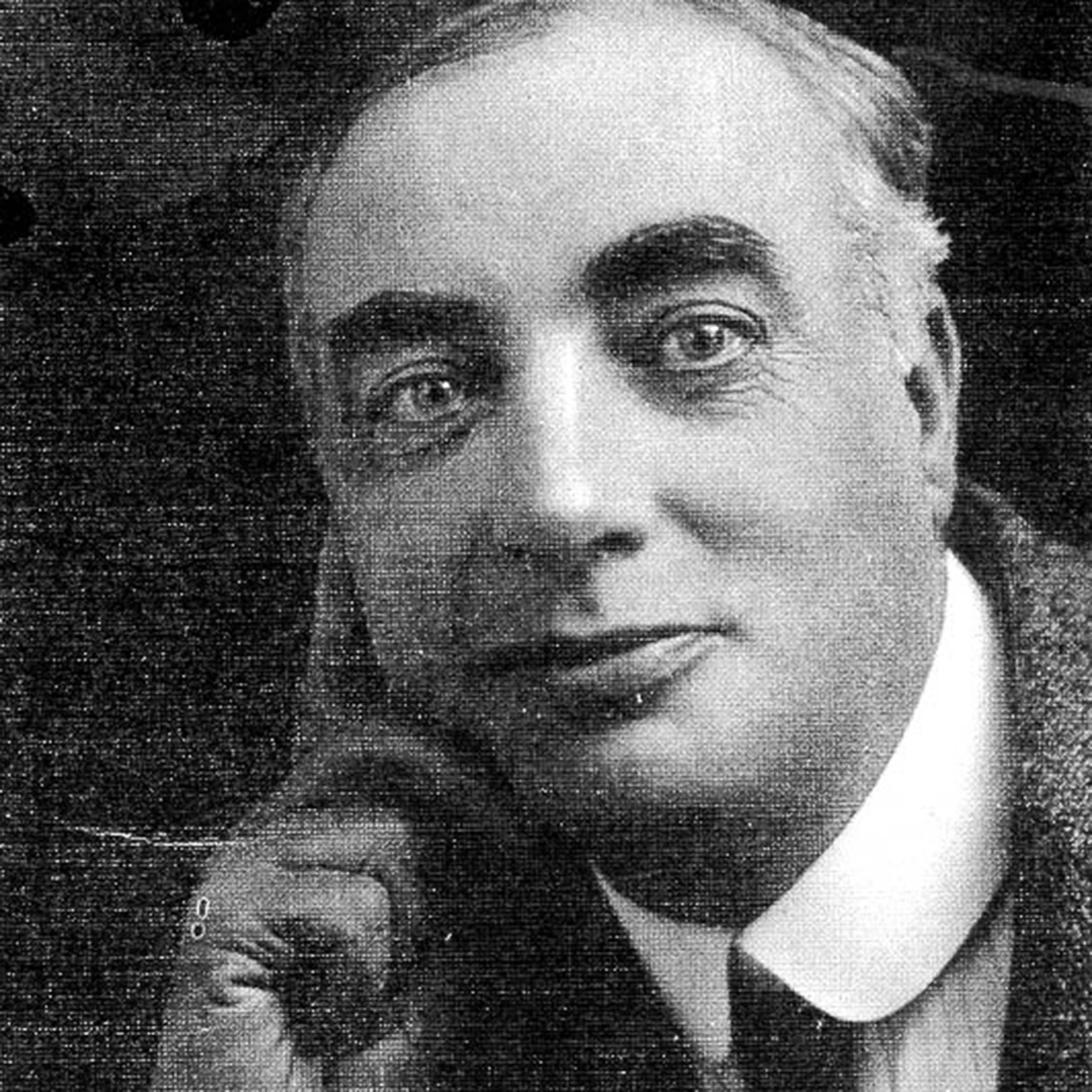 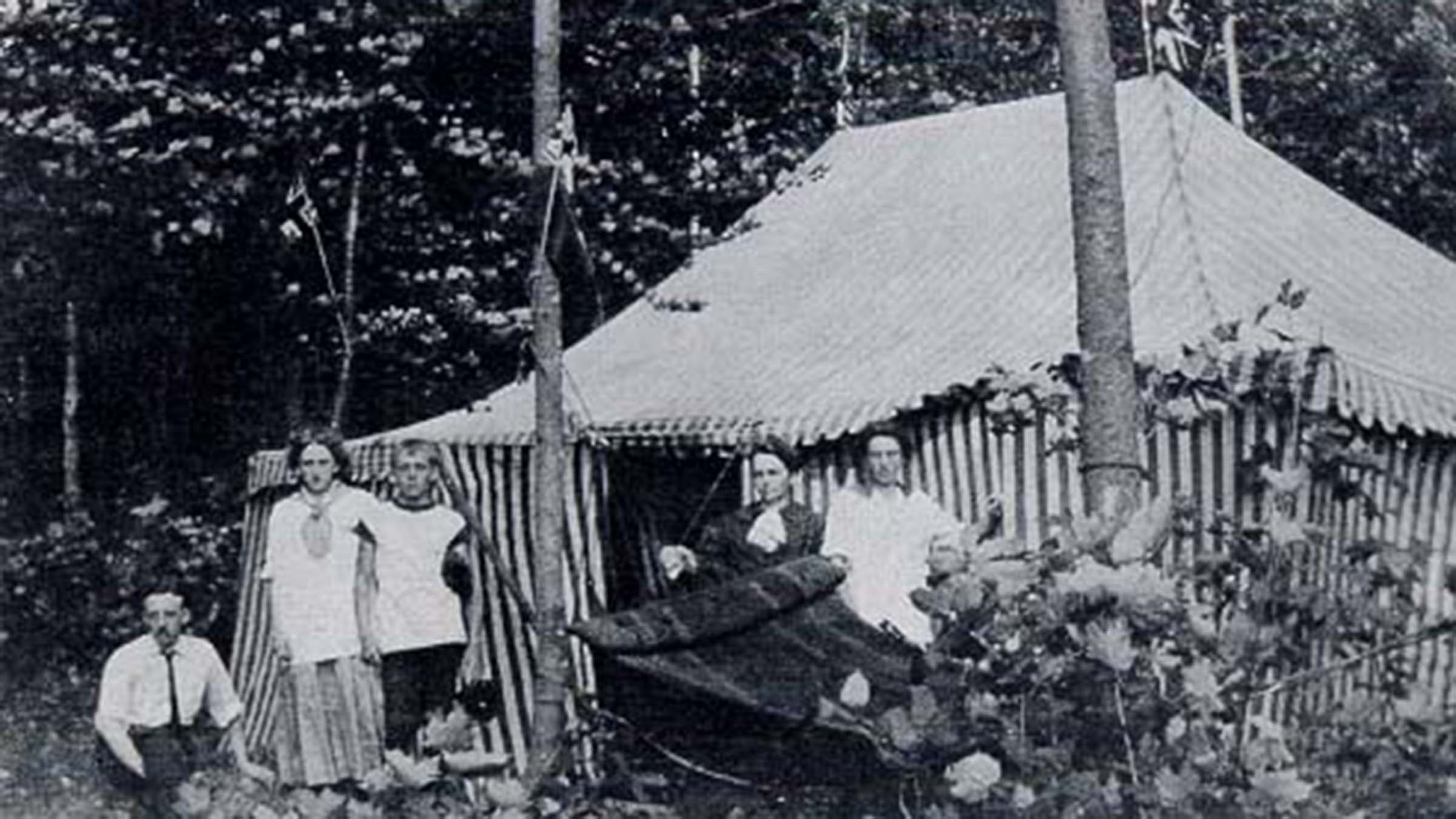 Deerhurst guests erected tents when the lodge was full

In 1896, a young, aptly named English entrepreneur named Charles W. Waterhouse built Deerhurst Resort on a prime four-acre plot on Peninsula Lake for which he paid $100. In fact he was inspired to build the resort by Captain George Marsh, who had started up the Huntsville Lake of Bays Navigation Company and needed passengers for his steamboats. Originally only accessible by steamship, Deerhurst became the first major summer resort in Huntsville and boasted 18 bedrooms, a dining room, a smoking lounge and a verandah. During its first season, Deerhurst hosted a total of two guests who paid $3.50 per person per week, which included three meals a day!

In just a few years, Deerhurst was filled with tourists and some even erected tents when all the rooms were taken. In 1900 Charles added the first of several cottages.  Deerhurst now boasted of steamers twice  a  day, plus telegraph and telephone service and daily mail delivery (one of the highlights of the day for both staff and guests). Not until 1972 would there be more than two phones  at  the resort. The days were leisurely, structured only around mealtimes, and activities included swimming, rowing in a skiff, tennis and fishing. Charles even took guests on fishing and hunting excursions in Algonquin Park. Charles retired in 1925 at the age of 60, selling Deerhurst to his only surviving son, Maurice, who had already started assuming the day to day management of the resort. 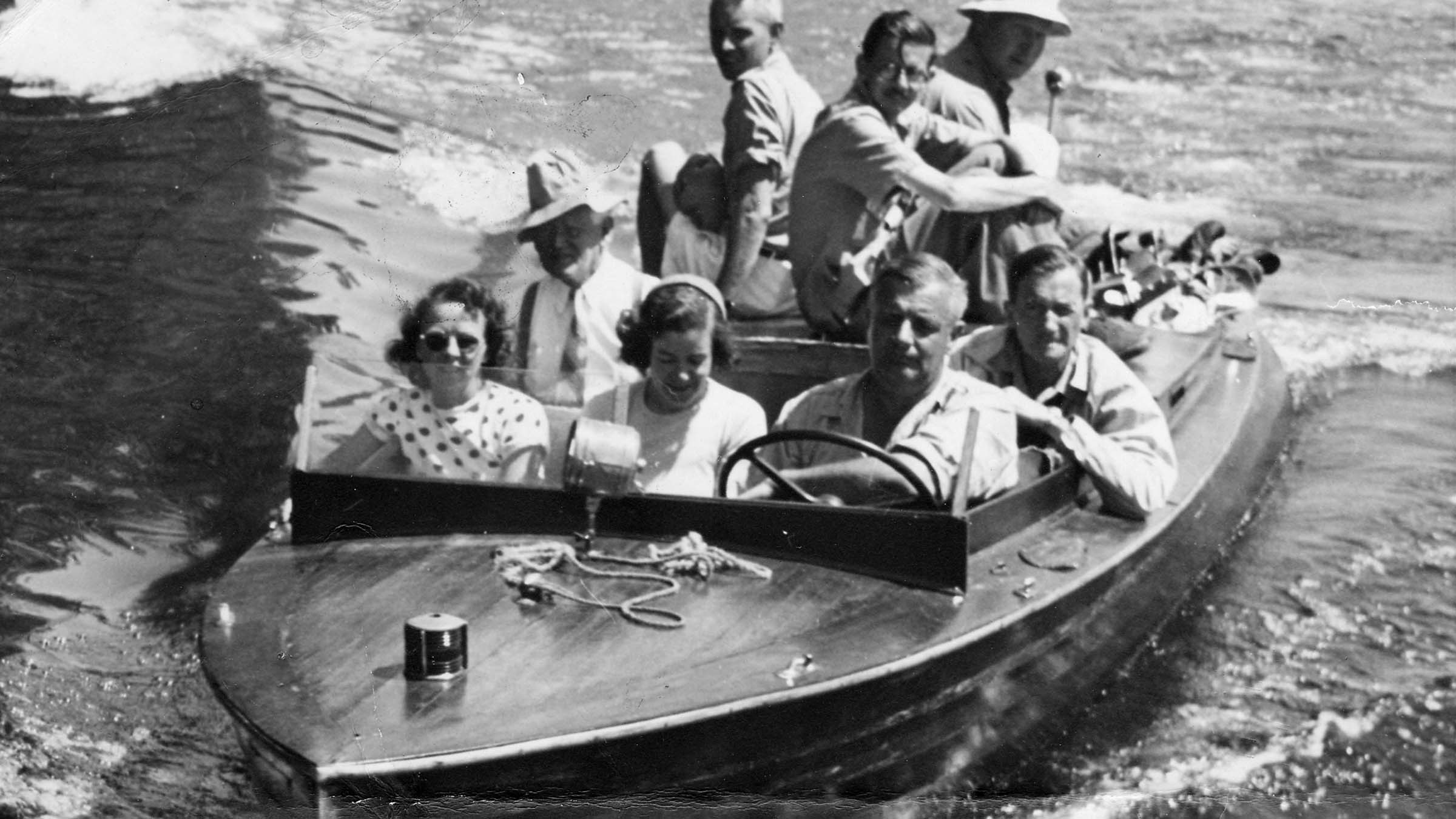 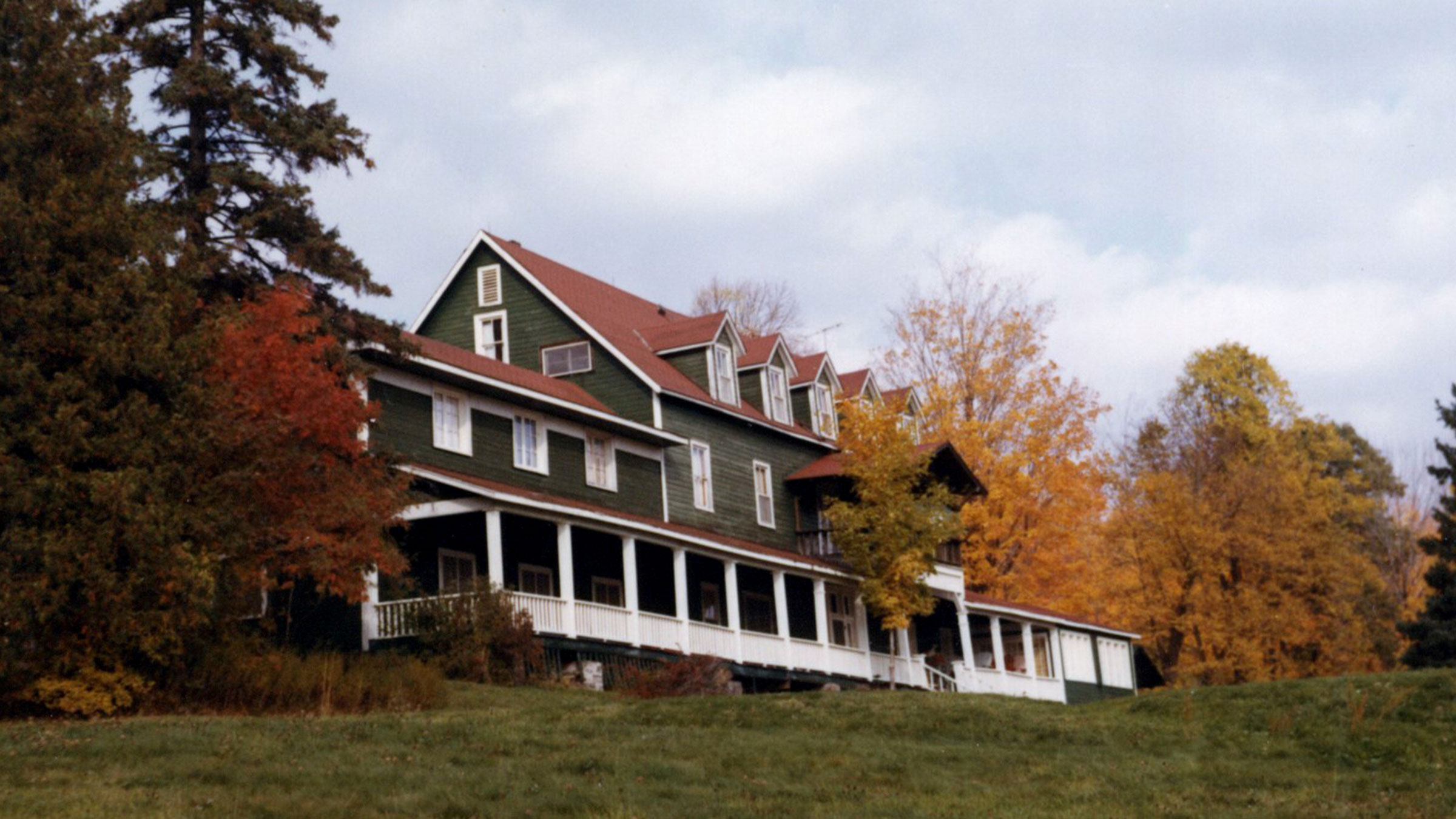 After his return from World War I, Charles’ son Maurice, took over he management of Deerhurst and carried on the resort’s established reputation for ‘gracious hospitality.’ Like his father, Maurice had much to do with the ambience of Deerhurst. Known as a superlative raconteur who was always telling jokes and stories, Maurice successfully ran Deerhurst from 1925 to 1971, steering the resort though the Depression (boosted by the thousands of tourists stopping on their pilgrimage to see the Dionne quintuplets near North Bay) and the transition from steamship to car travel.

Deerhurst’s clientele at this time, who were mostly American, returned year after year and some even stayed in cottages they financed themselves. Many of these guests marked their children’s heights on the cottage walls and stored personal belongings in private closets.  In addition to swimming, canoeing, tennis and golf at the nearby Pen Lake Golf Course,  Maurice took guests out fishing in one of the cedar-scrip fishing boats.  When a bass was caught, it  was cleaned (for fifteen cents) and prepared by the kitchen for breakfast. When the catch was a lake trout, however, it was prepared for dinner and paraded through  the  dining  room  on the  best  silver tray, to  the  cheers  of all  the guests. Over his fifty years at Deerhurst, Maurice introduced such 20th century conveniences such as electricity, hot and cold running water, and a large commercial kitchen. The resort grounds now spread out over twenty-five acres. 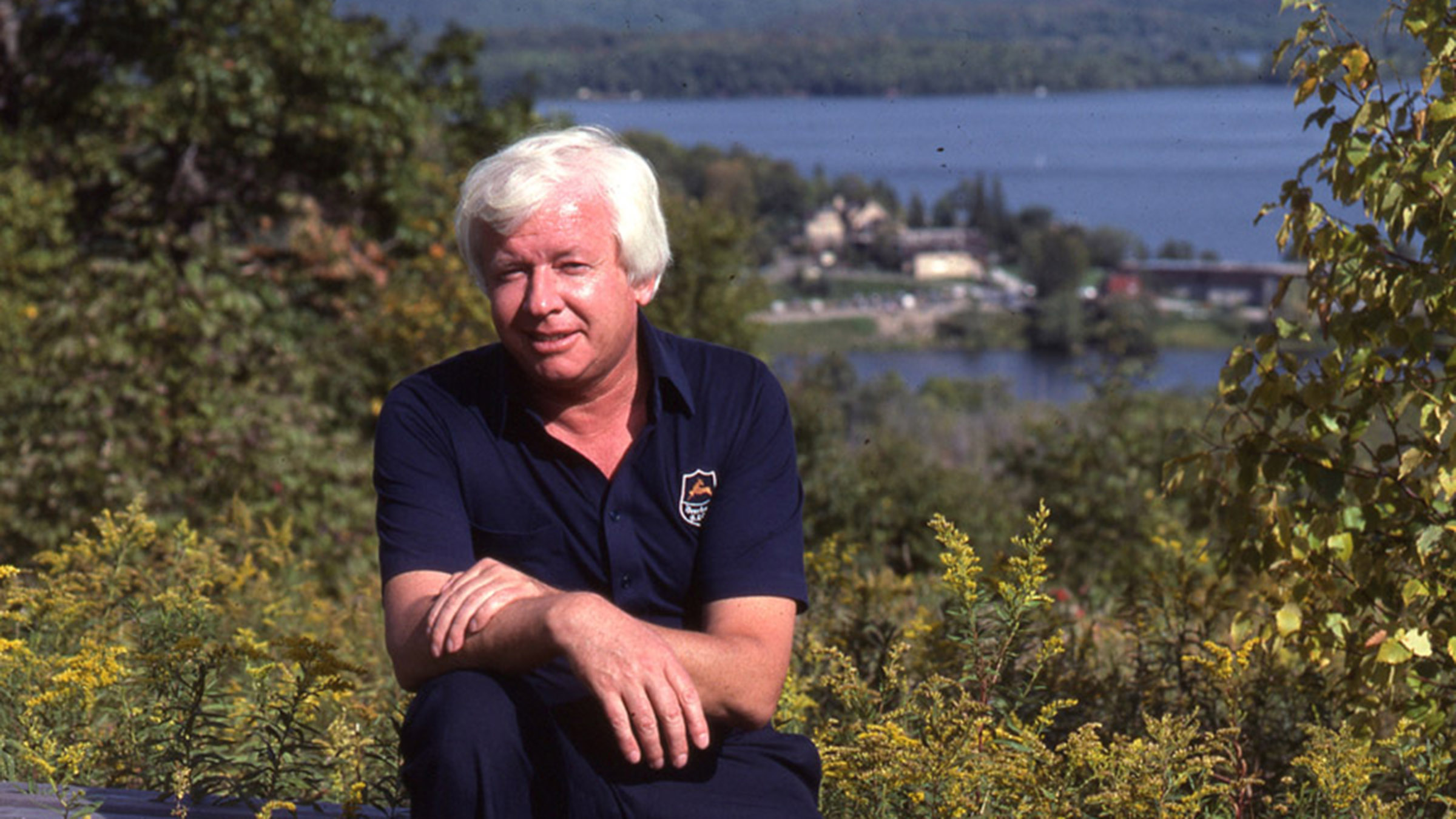 Bill Waterhouse at the lookout above Deerhurst 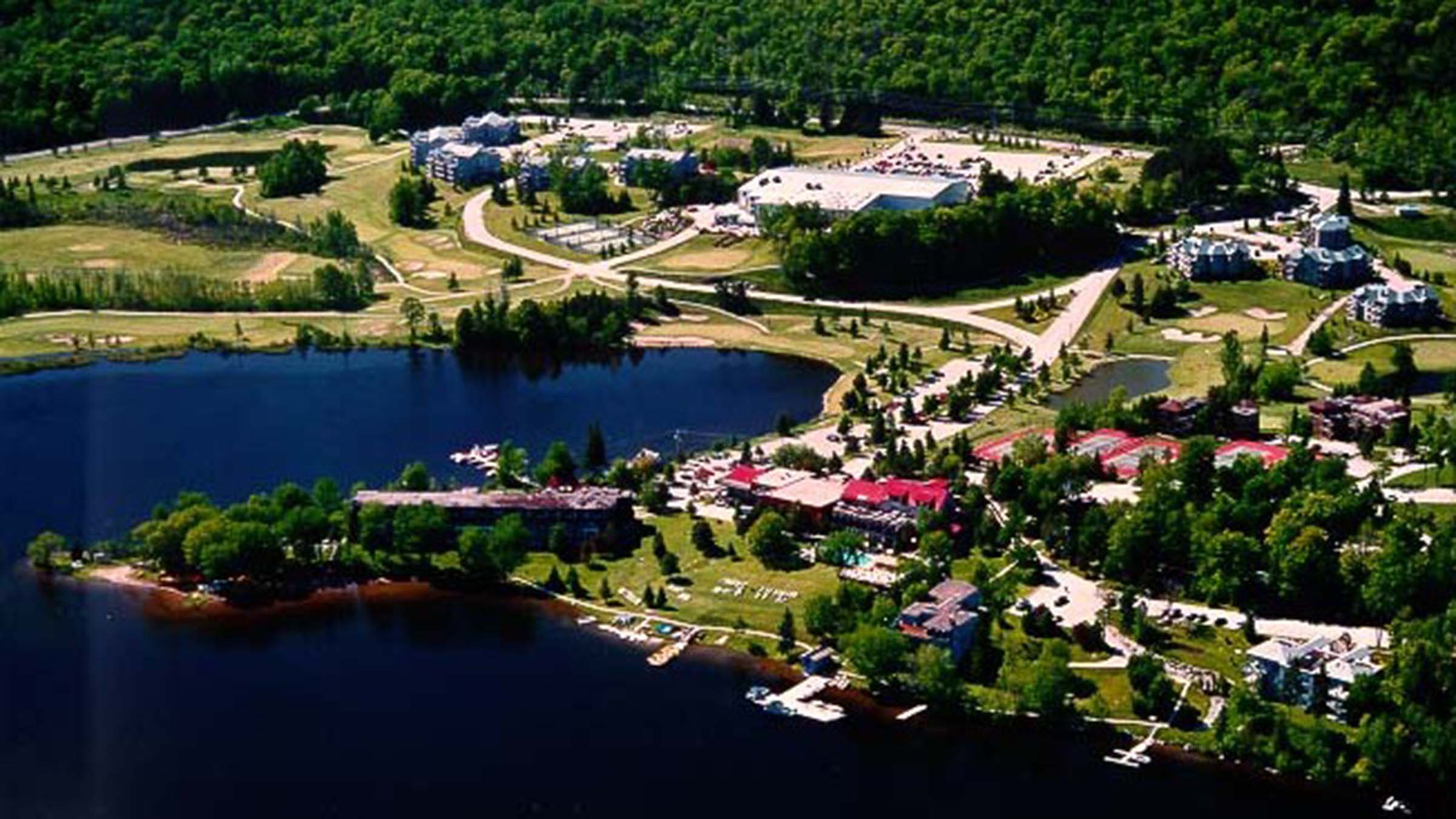 During Bill’s time at the helm, Deerhurst evolved into a world-class resort

Considered a pioneer of winter tourism in Muskoka, Maurice Willard (“Bill”) Waterhouse built and developed the Hidden Valley Highlands Ski Club and its adjacent chalet neighbourhood and hotel in the 1960s. In 1971, Bill purchased the resort from his father, Maurice, with a group of associates and embarked on an expansion plan that would evolve Deerhurst from a seasonal family-run resort into a showplace of Canadian tourism. Once the original lodge was winterized in 1972, Deerhurst became a year-round luxury resort with hot tubs and gourmet menus.  Conference facilities were added in 1980 followed by the live stage show that was destined to run for 35 years and spawned the career of one of Canada’s most successful recording artists, Shania Twain, who performed in the Deerhurst show from 1987 to 1990.

It was under Bill’s visionary guidance that Deerhurst grew into a 760 acre tourism destination with the addition of resort condominium accommodations, the top-rated Deerhurst Highlands Golf Course and the Pavilion conference and sports centre that is now the main hub of the resort.

When Bill Waterhouse sold his shares in 1989, three generations of Waterhouse ownership concluded quietly and without ceremony.  It is his dream on which the modern Deerhurst continues to evolve as one of Canada’s most storied resorts, and where generations of guests return to embrace the iconic beauty of Muskoka.